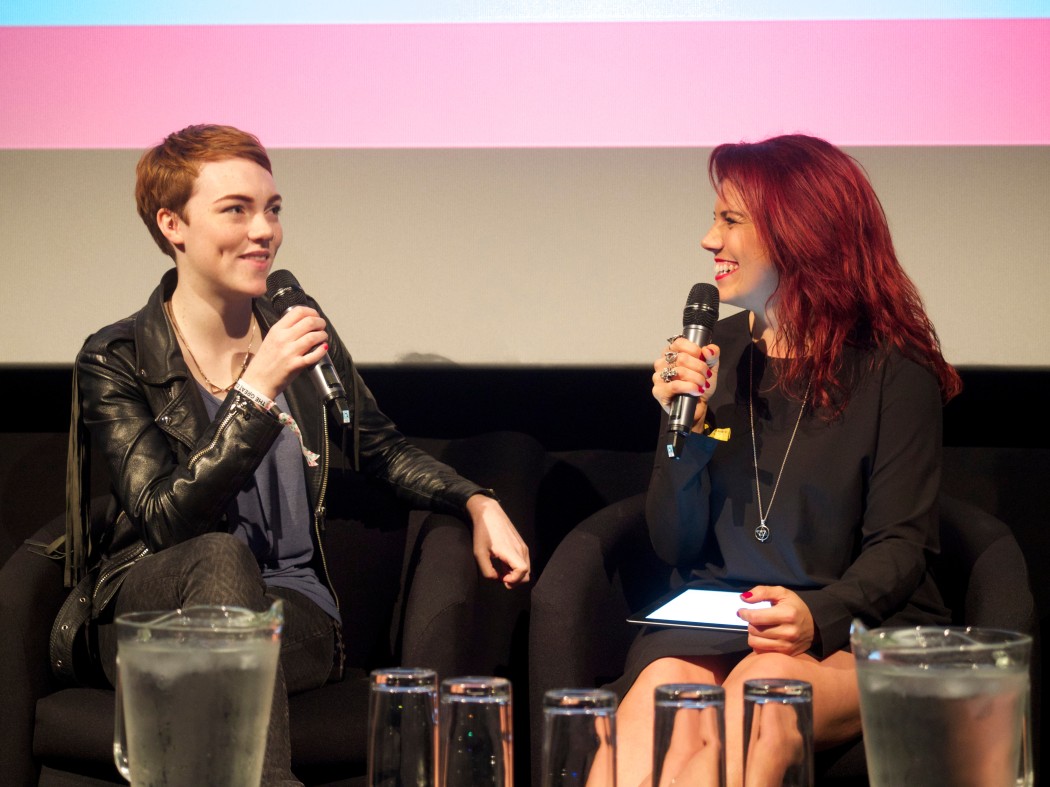 Alongside the CMU+TGE programme, TGE’s music industry partners together present a wide-ranging series of panel discussions, each focused on a different aspect of the modern music business.

Check out this guide to all of this year’s partner panels – listed venue-by-venue.

11:00–12:00
Attitude is Everything presents – Breaking into “Normal Land”
Does the music industry disable artists? Attitude is Everything invite you on a journey into the world of artists with access requirements and the barriers they face. The session will include the first look at the results of the charity’s groundbreaking research and outline the future of their Next Stage project, which will support undiscovered Deaf and disabled talent to develop and be recognised.

4 winners will be chosen from a shortlist of 8 applicants by our panel of industry experts and will give a unique insight into how funding decisions are made.
Applications opening announced via the Flash Funding webpage and PRS Foundation social media.

16:00–17:00
Funnel Music Presents: How New Models Can Support Development
In an era where digital music has radically changed the way music is consumed the development of artists has often suffered resulting in no major breakthrough artists in 2018 – how can new models help?
Funnel Music – “Breaking artists by sharing outcomes”.
Funnel is a new model designed to facilitate the development of artists in a digital age. Underpinned by a “Shared Outcome Agreement”’ the model helps reduce costs associated with early stage development without reducing the quality.

17:30–18:30
UK & European Guild Of Music Supervisors present – A Panel About How To Actually Land A Sync Deal For Once
Sync panels are a staple at any music conference you go to, but how often do you actually come away with tangible, useful, arguably heroic, advice which you can then apply to your music in order to best increase your chances of landing one of those juicy deals you hear so much about? Well, we’re here to do just that. Come join a panel of sync behemoths who have been hand selected by the European Guild of Music Supervisors to cover the creative process involved in finding the perfect music, and discuss how such deals work in TV, advertising, games and films. Bring a pen, you will want to take notes.

10:30–11:30
Loud And Quiet presents – Midnight Chats (live) with Self Esteem
At midnight you’ll hopefully be watching bands, so Loud And Quiet drags its late-night podcast into the daytime for this special one-off never-to-be-repeated-until-the-next-time live recording. Come and see Rebecca Taylor aka Self Esteem talk about… well we’re not quite sure yet, that’s the point. It’ll be excellent, though.

12:00–14:00
PPL, PRS for Music and PRS Foundation present…
LIFE & Nadine Shah in conversation with Huw Stephens: doing it DIY
From the raucous live shows of established Hull 4-piece LIFE to the darkly powerful post-punk of Mercury nominated, Nadine Shah; both are independent forces to be reckoned with. Mez and Stew (LIFE) and Nadine join BBC Radio 1’s Huw Stephens to talk about their DIY approaches and how they have built careers in the UK and overseas.

15:00–15:45
The Howl and The Hum in conversation with Radio 1
Following their Thursday evening performance at The Hope and Ruin, The Howl and The Hum join Radio 1’s Phil Taggart to discuss finding their feet in the industry, the impact of streaming and how it feels to be a guitar band right now.

16:00–16:45
Millie Turner in conversation with NME
Fresh off the back of her Thursday night performance at Patterns, Millie Turner talks to Charlotte Gunn (Editor, NME) about being an independent female artist and how youth empowerment plays an important part in her music.

13:30-14:00
Keychange, PRS Foundation – “Driving Diversity in Music” – Keychange and the campaign for gender equality in the music industry.

15:30–16:30
“Then and Now” – Skint Records founder Damian Harris in conversation with Bill Brewster

14:00–16:00
Supporting Independent Promoters – Skiddle Panel Discussion
Skiddle’s recent survey into promoters’ mental health and well-being showed staggering results. Alonsgide Association of Independent Promoters, they’ll discuss the stresses facing promoters, how to support others in the industry, and how to make the most of being a promoter. More details here

14:00–14:40
CD Baby presents – The Music Promotion Checklist: 30 Ideas For Release Strategy Success. You’ve recorded great music. Now you just want it out in the world. But given you only get one shot at releasing a new song or album, you need to get it right. In this session, CD Baby’s UK & European Director, Rich Orchard details the key promo and planning steps to focus on, in the weeks leading up to your release. Speakers: Rich Orchard (CD Baby)

14:40–15:20
CD Baby presents – Alternative revenue sources for artists: In conversation with Emma McGann. Independent pop singer-songwriter Emma McGann prides herself on breaking down the traditional wall between the artist and fans. Award-nominated for her efforts with music and live streaming, Emma’s colossal anthems of fearless, mew pop brilliance have earned her recognition from fierce female forces in the industry including Kylie Minogue, Nancy Sinatra and Beth Hart. For this session, Emma will be telling us all about how she is able to sustain her life as an artist through non-traditional revenue sources. Speakers: Emma McGann (artist) and Henriette Heimdal (CD Baby)

15:20–16:00
CD Baby presents – Demystifying Playlists: Cutting Through the Noise. Playlists are all the rage these days and they can have a huge impact on your music’s success. But there are a lot of misconceptions that cause artists to focus on the wrong things. What’s really important, and what’s just hype? In this session CD Baby’s Steve Cusack and Music Ally’s Isabelle Ljunqvist, along with Marketing & Editorial representatives from streaming giant Deezer and Napster’s Director of Commercial Label Relations will dispel the myths, and give you a clear picture of how to build your playlisting presence from the ground up. Speakers: Steve Cusack (Promotions Lead, CD Baby) / Isabelle Ljungqvist (Digital Marketing, Music Ally) / Adam Read (UK Editor, Deezer) / Sage Olito (Artist Marketing, Deezer), Markus Ernst (Director of Commercial Label Relations, Napster)

12:00–12:45
Nilüfer Yanya: A Case Study, Queens Hotel Bar
Since releasing three EPs, earning a place on the BBC’s Sound of 2018 longlist, and supporting the likes of the XX, Interpol, Broken Social Scene and Mitski, Nilüfer Yanya has released her ambitious debut album to unanimous praise. The team behind the album release speak about the process to date, and their future aspirations.

13:00–13:45
Bill Ryder-Jones: A Case Study, Queens Hotel Bar
People are often so in awe of the new that they can forget about the hard work of talented artists building long term careers in the background. Yawn is Bill Ryder-Jones’s 4th solo album and his first with BBC 6 Music playlist support. His album campaign shows that you can make inroads with the media at any point in a career. The team behind the release break down steps taken to get it over the line.
Speakers: Ellie Giles – Step Music Management, Chloé van Bergen – Domino Records, Aoife Kitt – Domino Records

14:00-14:45
How To Win On Social Media, Queens Hotel Bar
We’re increasingly told “it’s all about the socials”… but how to engage with social media effectively and, more importantly, how do you build a dedicated fanbase who will propel you or your artist into the stratosphere? Our expert panellists will guide you through making social media an integral strategic part of your core business, rather than just a roll of the dice.
Speakers: Mark Stein – Leaf Grow, Nadine Shah, Sandra Croft – Redeye Worldwide & Yep Roc Records, Jude McArdle – Association of Independent Music (AIM)

15:15–15:30
CI Presents: Strong Opinions, Queens Hotel Tower Suite 2
This new series of 10 minute quick-fire expert talks presented by Consolidated Independent (CI) will challenge leading figures from music and technology to deliver a short talk on a key topic.  ‘Strong Opinions…’ is not about flanneling or sitting on the fence – these must-catch sessions are all about leaders putting themselves on the spot, expressing Strong Opinions…with the expertise and data to back them up!

15:30–16:30
Believe Presents: DIY The Smart Way, Queens Hotel Bar
This panel focuses on artist distribution, tackling new distribution models, and how one promising artist has grafted through all the noise to build a fan base.
DIY is the subject on everybody’s lips, but how do you really make the most of the tools available in the modern music industry landscape in 2019? Breaking Swedish/Iranian and independent DIY artist Ayelle will be in conversation with Believe’s A&R Manager, Nikki Camilleri, and management company ie: music’s Head of Marketing, Stephen O’Reilly. Moderated by TuneCore’s Head of Artist Relations UK and former AIM Board member, Nathan Barley Phillips.
Speakers: Nathan ‘Barley’ Phillips – Tunecore / Believe, Ayelle, Nikki Camilleri – Believe, Stephen O’Reilly – ie: music, Clementine Bunell, CODA Agency

12:00–13:00
Centralized presents: How To Grow A Great Artist Career Without Cash, Queens Hotel Bar
The days of funding music projects solely with a hefty advances are in the dim and distant past. And it’s even harder for artists based outside the music industry capitals of London, New York, Nashville & LA to break through. Find out how you can sustainably fund your own musical mission without selling your soul.
Speakers: Hazel Berry – Soundcloud, Steve Palfreyman – Music Launch Hub, Brian Dubb – Centralized, Eva Greene – Black Acre, [ K S R ]

14:00–14:45
Fender presents: Indie artists and brands – making connections that work, Queens Hotel Bar
A panel hosted by Fender which looks at how independent artists can best navigate the brand space

15:15–16:15
CI Presents: Strong Opinions…, Queens Hotel Bar
This new series of 10 minute quick-fire expert talks presented by Consolidated Independent (CI) will challenge leading figures from music and technology to deliver a short talk on a key topic. ‘Strong Opinions…’ is not about flanneling or sitting on the fence – these must-catch sessions are all about leaders putting themselves on the spot, expressing Strong Opinions…with the expertise and data to back them up!

The TGE Conference runs from Wednesday 8 to Saturday 11 May 2019 and is open to all TGE delegates. Get your TGE delegate pass here.

CLICK HERE to return to the TGE Conference home page